The Marathon journey is in its third year. Put Pen to Paper is the current incarnation.

On January 24, 2019, the Marathon went everywhere and nowhere! I had a slight cold, or maybe some allergies flaring up, who knows, but I was sniffing and sneezing, and I didn’t have a lot of energy. And it was pouring down rain. 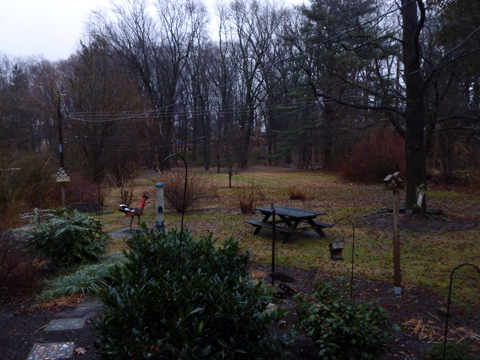 Back yard view from the house.

I decided to work in my own house in my nice warm (thank you, space heater) little office.

It took me some time to focus on what I wanted to write. There has been a lot going on here this week at my house and I had to put some effort into turning my thoughts to writing. You know what I mean. Some days you feel a little vague, right? That’s today.

Front yard view from the house.

So I decided to make use of the vagueness and do a session of speed poetry writing – where I set a timer for an hour and just blurt out whatever comes to mind. This kind of work takes a bit of polishing up later on but it also can bring out some interesting ideas and poems. The things is, you do have to wait a bit and let it settle before you can tell if anything good came from it. Well, that’s fine. Sometimes it’s just making the effort that counts.

So that’s what I did – though I worked for longer than an hour. You do tend to get caught up in one poem and stick with it and … suddenly, time has really flown by!

Then of course, Little Vines, after a break for lunch.

Here are some results.

I was thinking about my years as a competitive swimmer and about fourth place. Where the rest of this poem came from, no idea.

This haiku focuses on something I think when I see this situation.

5.
the abandoned car
parked on the side of the road
grateful for the rest

I was thinking about how nice it was to have a porch to stand under on a rainy day like today when you are trying to get in your front door – and that led me to imagining this scenario. It is a tanka chain, if there is such a thing, and if not, well, I guess it’s just…a poem about trying to get into your house!

9.
Key in side pocket
cold fingers fumble it out
Drop it. Hit forehead
on doorknob bending down to
reclaim key. See stars. Lurch. Swear.

Dark house. Cat springs out
Feet tangle and it’s all stop
Cat and person and
tile floor and back-angled wrist
not quite sprained. Swear again. Home.

a.
A hypnotic marimba run
up and down the scales
It was one night a long time ago
I will never forget it. Never.

b.
definition of imposter:
a whole other person
that you aren’t

c.
think of primitive when you think of me if you like
it will be your mistake
I am self-awareness clothed in a black linen sheath dress
I am that ancient amphibian seeking out prey

f.
we’ve all switched identities so many times
and now you know if anything happens to me
you will not be sure of it

j.
what can I tell you
about our new backstabbing group
other than our motto: “let’s put it all behind you”.

l.
Mirthful at the macabre joke
Guffawing as we inhale the noxious smell
coming from our brother’s birthday cake

o.
abrupt and so cold
you have perfected that expression
how well you know me and what will persuade me

p.
watch closely the three moons in the sky
somehow two of them got involved and then
one day there was a third

q.
These days
I’m living my dreams
with some parts blacked out

r.
please come home
natural vs. synthetic
no longer matters to me

u.
worst of all
I’m sure I know what you mean
when I say the refrigerator seems to have serious breathing issues

v.
not to discipline the yarn but to coax it
not to tell the story but to ask it
This is my advice to you.

w.
gossipy old men
they all say the same thing
once they finally find themselves in the afterlife

z.
the very lonely pie
due to its taste
the only thing left in the derelict spaceship

bb.
give me five minutes just five minutes
with that four-layer meatloaf
I’m not afraid to test my limits

dd.
the mathematics of my thinking are running in circuits
my concentration exists in an eternal looping and buzzing
may the tiny nails hold firm.

Thank you for reading!